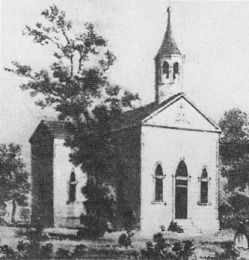 ​St. John the Apostle parish has been a key part of the Oregon City community since 1846 (and even before, with the founding by Father Modeste Demers of the Young Ladies Institute School - in 1844).  Although the parish of St. Paul, Oregon, became the first parish school of the Vicariate Apostolic of the Oregon territory in 1838, St. John's became the mother parish of the new Archdiocese of Oregon City in 1846.

As early as 1841 Father Blanchet celebrated Mass at Willamette Falls, but apparently on the west side of the river in the Indian village and not within the present Oregon City.

In 1843, Father Blanchet accompanied Dr. John McLoughlin to the new Oregon City town site and selected a block for a church and school, the original site of St. John's Church and McLoughlin Institute. Archbishop Blanchet's records state he paid $225 for the land.
On March 1, 1844, Rev. Modest Demers became the first pastor of St. John's and on March 3, 1844 the first Mass was celebrated. St. John's was the 2nd Catholic parish dedicated in Oregon.

Within 20 years of the parish's founding, the Archbishop had moved administration to the new growing city ofPortland; and in 1926 the name of the Archdiocese was changed to the Archdiocese of Portland in Oregon.

When we got started in 1846, the "parish boundaries" included the Northwest Territory and extended up through British Columbia.  But from day one it was in the works to establish new dioceses within the ecclesiastical province, which then included Oregon, Idaho, Montana, Washington, and Alaska.

The parish community has waxed and waned over the years, partly reflecting the economics of the area, and the original location of the parish church, school and administrative facilities changed from 10th and Water Streets (west of the Singer Hill railroad tracks) to their present location at 4th and Center Streets after World War II.  Meanwhile St. John's Cemetery got a head start, at its present location, expanding there in 1885, beyond the little parish churchyard and adjacent property at 10th and Water Streets.
​
Dr. John McLaughlin, the "Father of Oregon", became the canonical "founder" by donating the land for the parish, and he and his wife were one of the original parish families.  We have a long and venerable history, and a bright future.  The road thus far travelled as awe-inspiring; we continue on our pathway together in the company of Christ whose cross guides our way.

​A big thank you to Sharon Ryan @ Heritage Trail Press for supplying us with some of the historical information stated above.